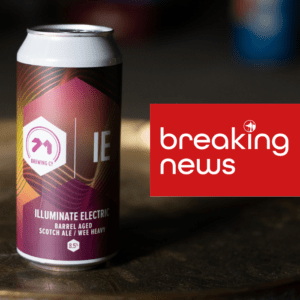 Independent craft brewery, 71 Brewing, has teamed up with Tullibardine, one of Scotland’s oldest whisky distilleries, to develop and launch a new barrel aged Scotch ale called Illuminate Electric which will be released to the public this Friday, 18th November.

The collaboration between the two producers is a natural extension of 71 Brewing’s circular economy philosophy and takes Tullibardine back to its 15th century roots as a brewer of beers, before it evolved into a whisky distiller. The casks provided were freshly available having previously contained liquid from Tullibardine’s Signature 228 Burgundy Cask Finish, matured in former Pinot Noir barrique casks.

The result is Illuminate Electric, a deep amber scotch ale, showcasing a complex malt bill with notes of brown sugar, molasses, treacle, caramel and toffee with whisky character shining through.

“We’re delighted with the results of this first collaboration with Tullibardine. It’s created the perfect ale for winter drinks. The whisky casks have given the ale a depth and maturity that has a richness and complexity of flavour. We’re delighted to be returning the casks to Tullibardine where they will be used to mature a fresh batch of liquid gold. To our knowledge this is a rare thing to do. There are examples of whisky casks being used to mature beer, but rarely being returned to mature whisky. It may take a few years to taste the results, but it’s a very interesting development nevertheless.”

“This is a really interesting project for us, we’re always fascinated by how our wood and liquids work together, whether that’s through our whisky finishes or sharing casks with other categories entirely. We were delighted to collaborate with award-winning 71 Brewing to bring some new additions to their exciting portfolio and we’ve been impressed by the results. The casks provided were freshly available having previously contained liquid from our 228 Burgundy Cask Finish. We will now get one of each cask back to refill with our liquid and discover the effect the time with beer has had on the cask and in turn what it will do to our liquid to create a potential single cask release.”

71 Brewing is becoming increasingly known for its innovative approach to brewing. Describing itself as the “engineers of beers”, this is both an historical nod to its Blackness Foundry home at the heart of Dundee, but also in its new wave, modern  brewing techniques. Just last month the brewery won four Gold awards at the Scottish Beer awards 2022.

For more information on 71 Brewing and the full range of beers available including Illuminate Electric, please visit: https://71brewing.com.